Different methods allow to reproduce a pattern with GroundForge.

The catalogue pages are the easiest way to start experimenting with grounds.

The generated pair diagrams don’t care about plaits and something-pin-something and draw them as plain cloth stitches. Furthermore, the distances between stitches are optimized to some average. So when trying to start with some familiar pattern to make variations, you may have to simplify, mirror and distort it to recognize it in the TesseLace Index or match up with the encoding system of GroundForge.

Let us illustrate the process with an example:

Snapping to a rectangular grid might not help to recognize the corresponding pattern in the index. See also the trick with colors on the Reshape Patterns page, we’ll get back to snapping further down the page.

The template below contains objects to assemble a matrix required for the parameters. Each object represents a stitch and the pairs used to make the stitch.

Start with the simplifications and distortions as described under Recognize patterns. The snapped versions of the example happen to abide the rules for a valid matrix: diagonal connections span just one square, horizontal and vertical span one or two squares. Lookup the digits or letters from the template and fill them in on the adjusted diagram. You might need more repeats than expected to figure out a tiling.

The next step is figuring out the tiling. GroundForge uses only rectangular tiles, that might not match the natural repeat of a pattern. The tiles in the example are surrounded with a red-dotted line and stacked as bricks in a wall. An alternative stacking method looks like a checker board though the tiles can be rectangles. Finally read the matrix from the symbols within one tile. Note that empty spots require a dash as shown on choose stitches, it would get confusing with this example.

To see if it is possible to reduce a rectangular tile to bricks, divide the rectangle in four quadrants. If the upper left equals the lower right and the upper right equals bottom left, you can use the top half or bottom half as brick tile. It saves IDs of stitches to assign. 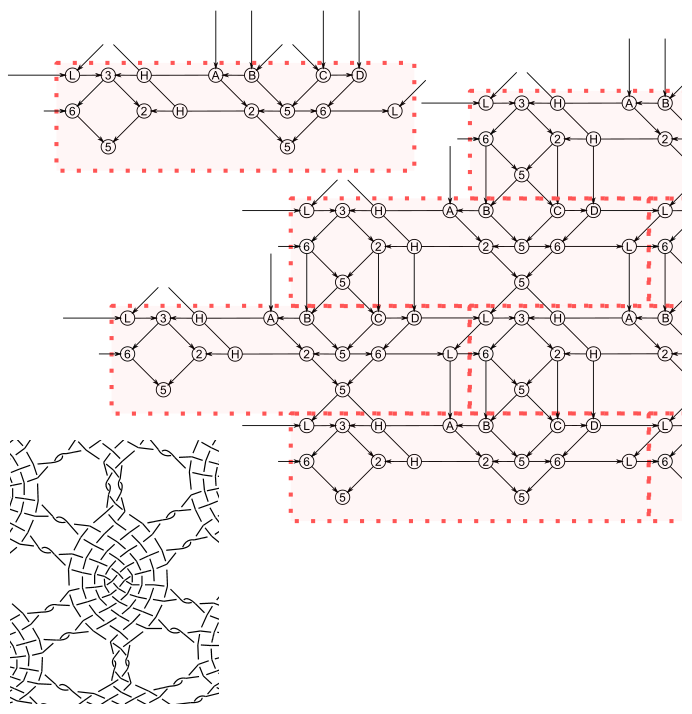 With an SVG editor

You can also use a general purpose editor like Adobe-Illustrator, CorelDraw or the free InkScape and the SVG version (right click to download) of the template.

The symbol in each template object has six free snapping points, two of them should be connected with other objects. Copy-paste these objects to assemble a pattern without changing the length or directions of lines connecting the symbols. It might need some out-of-the-box thinking: the Binche snow flake example above has horizontal connections and the vertical connection is reduced to a single stitch. Stretching the stitch into a kind of plait with a hole (ctcttctc) reveals traditional connections in the thread diagram.

The image below tries to show how to dissect a pair diagram as if it is a thread diagram. The blue shapes enclose stitches with two pairs alias threads. The red shapes collect stitches into a repeat with three rows of the diagonal base pattern, its matrix: 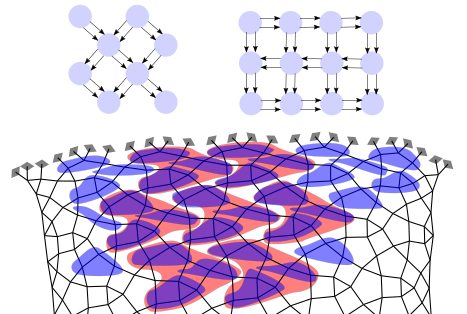