Binche Kompakt is sampler designed by Hildegund Jene which features 32 different grounds drawn from Flemish, Parisian,and Valenciennes laces. Ground number 31 in the sampler is particularly challenging to work because it uses a combination of half-stitch (CT) and whole-stitch (CTCT) in the ring pairs. To better understand this ground, a GroundForge model was made.

Since this lace ground has been captured in GroundForge, it is relatively straight forward to play with different snowflake variations. We invite you to experiment using the GroundForge base pattern with or without foot sides.
Click on a stitch in the pair diagram to apply the stitch specified in the textfield just above the diagram. This text field can have any combination of ‘c’, ‘t’, ‘r’ or ‘l’ or just a ‘-‘ to drop a stitch.
For more detailed instructions on editing the stitches, please refer to the Help page. 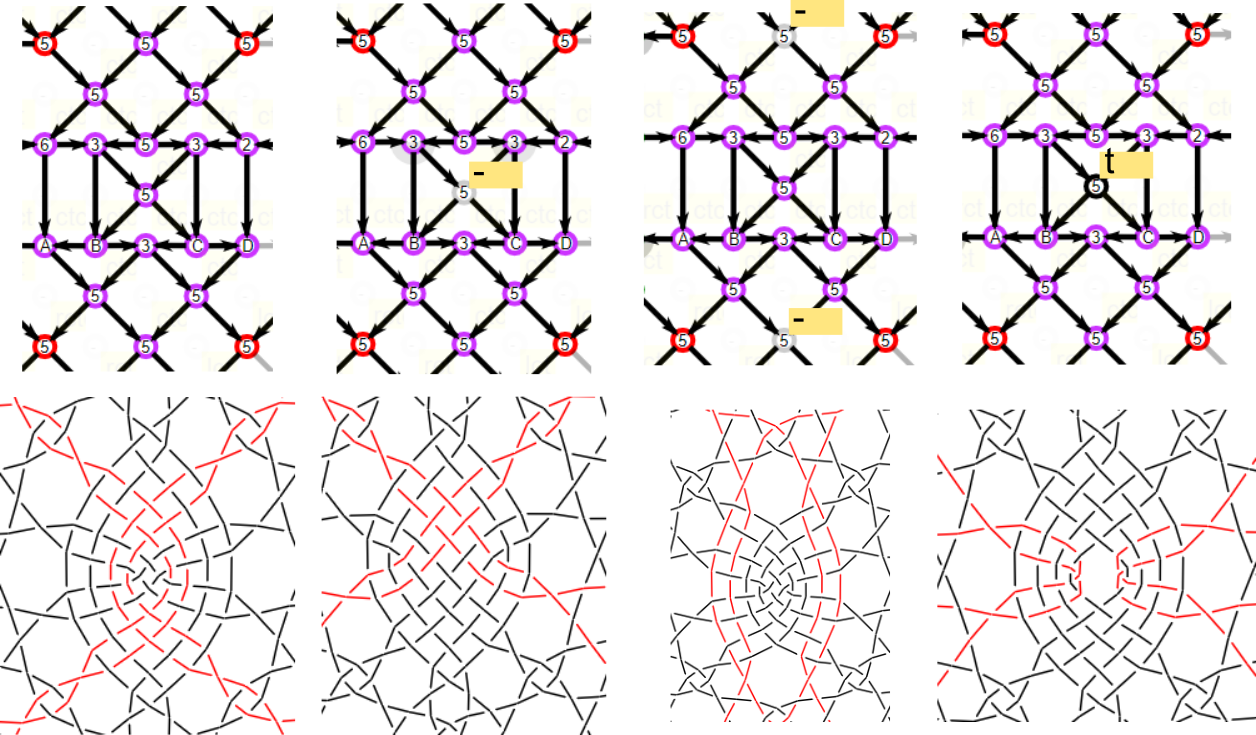 The extensive catalogue Viele gute Gründe by Ulricke Voelcker-Löhr contains many snowflake variations. Several of these are similar to the four variations presented here:

This gives 41 snowflake-variations that can be easily modeled in GroundForge. We can multiply this by the 22 variations of B4 (stitch variations for ring pairs that surround a six-pair element) to give 902 stitch-variations of the basic pattern documented in VGG. Using slightly unorthodox methods, such as twisting only the left or only the right pair (only B3.33 and B3.106 of VGG use these kinds of stitches) or allowing more than three cross/twist combinations at each intersection, results in thousands of variations.

In issue 2000/2 of the Belgian lace magazine Kant, Anne-Marie Verbeke-Billiet published a handkerchief pattern called Anneke based on an old Valenciennes example. She included four variations of stitches traditionally used in Paris ground and in the ring pairs around snowflakes. The variation that is most unusual uses a combination of whole (CTCT) and half (CT) stitches. This stitch combination, which she labels TT4 in the article (see also B4.2 in Viele gute Gründe by Ulricke Voelcker-Löhr), has the effect of blurring the ring pairs around the snowflakes until they almost disappear. According to Verbeke-Billiet, this stitch combination was once as popular as the whole stitch variation (TT1 in Kant and B4.1 in VGG) that is so familiar today. TT4 fell out of the lacemaker’s repertoire about one hundred years ago perhaps because, like many half-stitch grounds, it is very difficult to work. The threads don’t travel in tidy vertical and diagonal lines making it hard, especially when worked without pins, to keep track of where you are in the pattern.

In 2004, Hildegund Jene published a sampler called Binche Kompakt which featured 32 different grounds drawn from Flemish, Parisian,and Valenciennes laces. Ground number 31 is the challenging TT4 ground described by Verbeke-Billiet. When Jo Pol started to work on Binche Kompakt, she could find neither a thread diagram, nor a high resolution photo of a sample of TT4. She decided to create a thread diagram using GroundForge. This exercise motivated Pol to include several of the features you find in GroundForge today.