On each lace ground page, below the pair and thread diagrams, you will find an area labelled Edit pattern. You can use the controls in this area to modify an existing pattern (add a headside or a footside, for example) or to create a new pattern.

We will use Rose ground as an example and define a pattern for it from scratch. There are many ways to draw the pair diagram for Rose ground. One way to think of it is as a checkerboard with a diamond inside each of the black squares.

Define the base pattern

A lace ground consists of a small pattern that is repeated, like a wallpaper or printed fabric pattern, to cover the area you need to fill. This small pattern is called a base tile. The area labelled Pattern definition contains three text boxes. The left and right boxes define the headside and footside. We will discuss them later. The middle box defines the base tile.

The first step is to look at a ground and identify the base tile. There are many ways to do this and over the course of this tutorial, we will show a few of them.

Each rectangle highlights one repeat of the Rose pattern. For convenience, on the right of the image above we have moved the rectangles slightly so that it is easy to see all the intersections of pairs within a rectangle (no intersection lies on the edge of a rectangle).

Next we will map the pairs in the lace ground to a grid. Draw a grid on top of the base tile on your paper copy as shown by the red dashed lines in the middle image above. Within one repeat rectangle, the intersections lie on four columns and four rows.

For each position in the grid, we assign a symbol. The symbol specifies the angle and direction of the two pairs that are coming in to meet at that row/column position. The meaning of each symbol is shown in the Cheat sheet just below the Pattern definition area. For example, in row 1/column 1 the yellow arrows correspond to the symbol 4 which is a pair coming straight down and a pair coming diagonally down pointing south-west. Similarly, in row 3/column 2, there is no intersection of pairs which we represent by the symbol -.

We can now fill in the middle section of the Pattern definition area. Notice that the pattern diagram updates to match the symbols as soon as you click outside of the text box. 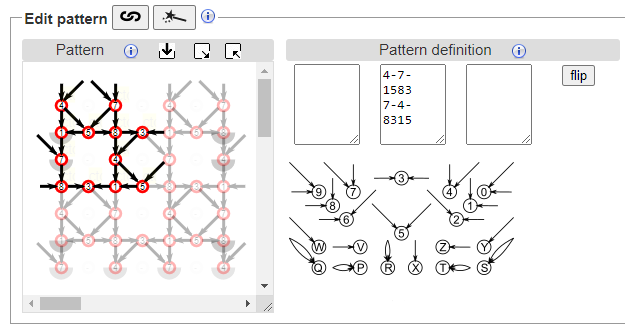 Now we need to specify how to connect the many copies of this pattern together. This is done in the area labelled Tile layout. For a simple arrangement, just click on the solid blue square in the drawing of a simple tiling as shown in the figure below.

Notice that this changes the numbers in the green and purple boxes at the bottom of the Tile layout area. Let’s discuss what these numbers mean. Consider several meters of a lace edging. The pattern for the edging is not several meters long. It is a smaller pattern that you repeat over and over again by sliding the pattern along in one direction. This gives a long strip. To make a larger rectangular sample from a small pattern, we need to slide the pattern in two directions.

Consider the image below. Red dashed lines show the grid overlaid on the pattern.

Creating a smaller base tile

You might have noticed that in the simple tile arrangement, we actually have two “roses” in the base tile. We will now look at two ways to reduce the number of intersections in the base tile.

For some patterns, as shown for rose ground in the image below, the repeating rectangles can be arranged like vertical bricks. Notice that each brick contains only one “rose”. 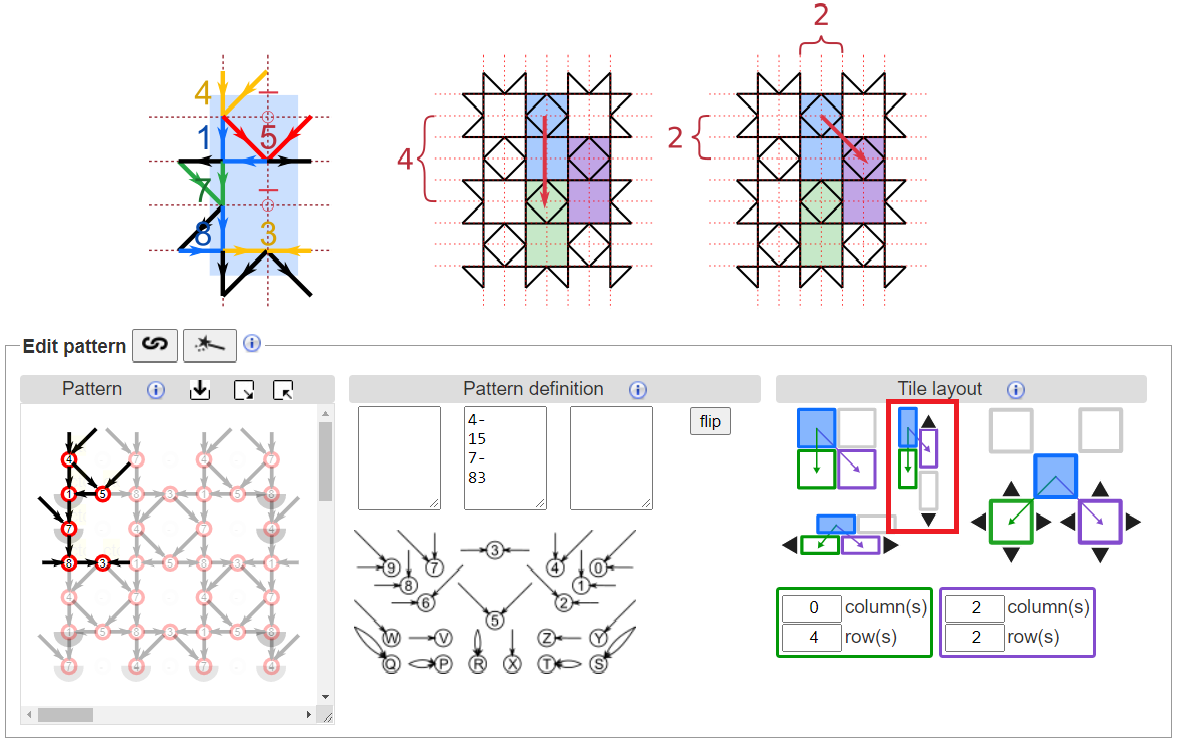 For a vertical brick pattern first identify one brick and label each intersection with a symbol from the cheat sheet as we did for the simple tile. To glue the copies together to make a larger pattern, first click on the filled blue brick in the picture of vertical bricks.

For the overlap layout, make the base pattern a little bit larger, as shown in the second drawing from the left, to encompass any intersections along its border. Notice that the squares overlap at the corners.

Finally, we arrange the copies. Click on the filled blue block in the image of a checkerboard. Initially, the copies will be placed corner to corner. Click on the black arrows around the green and purple blocks to nudge the copies so that they overlap as desired.

It is important to have only one copy of each stitch in the pattern, otherwise unexpected things can happen. Therefore, an important last step is to remove the duplicate stitches that appear in the overlapping corners. Replace the overlapped stitches in the bottom corners with as many -’s as required, as shown below in the green boxes.

For convenience, you can set all stitches in the pattern to the same value. In the Diagrams area, there is a text box above the pair diagram. Enter a stitch as a sequence of c, t, r or l (for example, cttct). Click on the assign to all button and then on the

image to regenerate the thread and pair diagrams. This is a quick way to see how a ground looks in cloth-stitch, half-stitch or whole-stitch. To change individual stitches, change the text box again and click an intersection in the pair diagram. 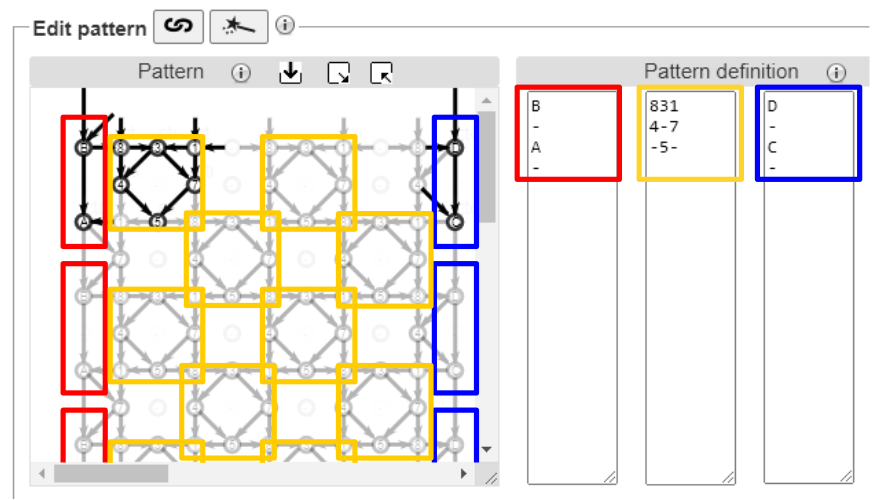 First, we will consider the simple example of Torchon Ground. Lay a square grid over the pair diagram. We must identify the loose ends of pairs along the edge and match them up where possible. To do this, we can use a “kissing path”. A kissing path follows one set of pairs through the pair diagram. When two pairs intersect, the kissing path does not cross over to the other side, it just touches the other pair (“kisses”) and continues. You can think of it as the path that a pair of threads follows if a turning stitch (cttct) is used at each intersection. The yellow and blue thick lines in the figure below highlight the kissing paths for the pairs at the edge of the pair diagram. Note that several incoming edges are missing on the yellow kissing path (dashed red lines). We can add them by labelling the incoming pair intersections using the symbols W, Y and - in the Cheat Sheet:

Alternatively, we can make the edge straight by adding another pair of threads, shown in red below.

Below is G-4 with left footside. Notice the red box around “V,6” in the ground area of the pattern diagram. In the original definition, this was “-,L” which draws a long horizontal edge. The long horizontal edge sticks out on the left side of the patch. We can get a better looking footside by shortening this edge. In order to get a short edge on the left side of the patch, we changed the ground definition to use two short horizontal edges in a row (“V,6”) instead of one long edge (“-,L”). The symbols “V,6” and “-,L” give the same result in the thread diagram. On the footside, we can cut the ground pattern off at “6” which gives a nicer looking result (see red box around “C,6”, the “C” intersection is part of the footside. The “6” intersection is part of the ground). As an exercise, create the right footside. 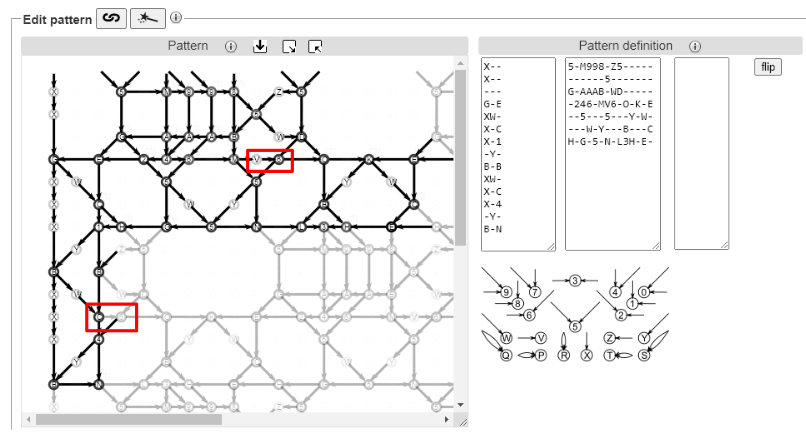 You can also create a traditional footside that has several passives.