This article is about the InkScape extension, with the web-based version you gain examples but loose functionality.

Once the extensions are properly installed, you can select polar grid from the bobbin lace menu under extensions.

A dialog allows to configure the grid. A few notes:

effects of ignoring the cheat sheet:

Pin distances should more or less match the thread size. Multiply the desired radius by three and divide the result with the desired distance to get a rough estimation of the required number of dots. The value however changes from the inside to the outside. The measurement tool of InkScape (available since release 0.91) can tell you any distance you want to know. 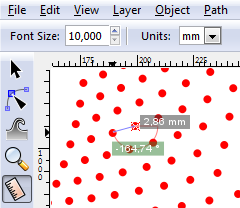 Repeats and number of dots

The generated dots are grouped per circle. The properties of a ring of dots has a label with the diameter. The number of dots on a circle is shown by the status bar of InkScape. To delete sections of the grid (to keep just a pie or fan) you first have to ungroup these circles, the label with the diameter will get lost.

A big difference between inner and outer diameters can cause a big difference in pin distances. You can overcome this with concentric grids with different numbers of dots. Take the diameter of the last or second-last ring as the diameter to align to.

The ratio of dots between the green and red grid in the example is 2:3. This difference could for example be bridged with asymmetrical spiders, in this case four legs on the inside, six on the outside.

Merging grids allows more than the built-in choices of dot-patterns. A few examples: 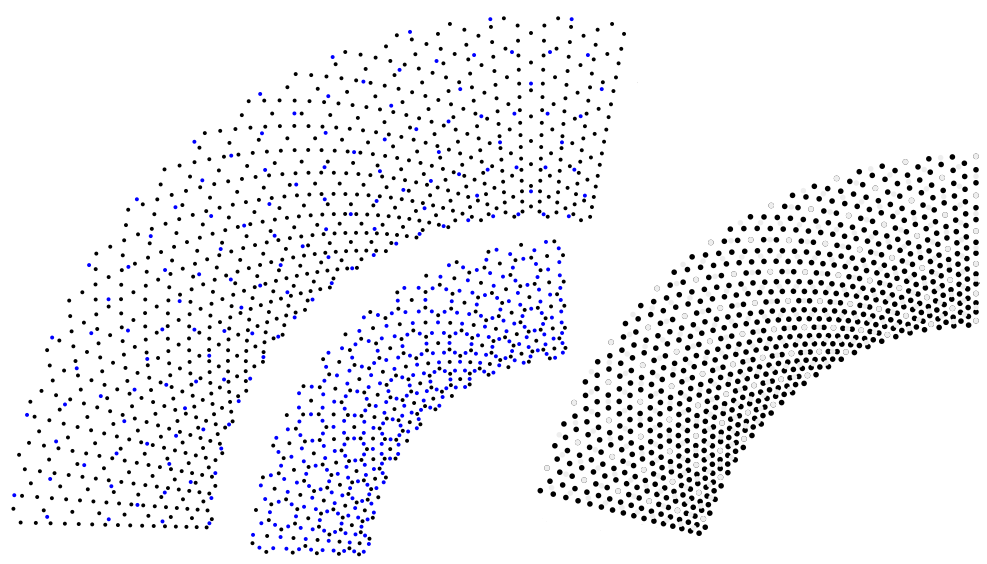 The Java proof of concept in DiBL is a stripped version of the stand alone Java version in the BobbinWork project, the interface of this old generator might be challenging and it provides only the diamond pattern of dots. It served as a blue print for the python script.

This page was generated by GitHub Pages.